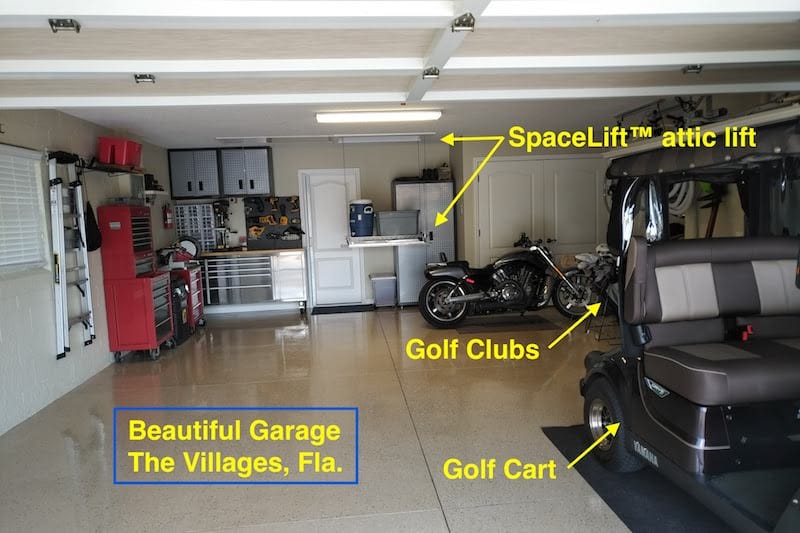 SpaceLift in The Villages

Customer Letter about Their SpaceLift™ Storage Lift Installation in The Villages®, Florida.

We sometimes get such wonderful letters that we want to share them in full with our website visitors and blog readers. (A few excerpts from Bill’s letter are on our Testimonials Page.) Such is the case with this “love letter” from a very happy customer. Our SpaceLift in The Villages story fits the huge retirement community to a tee. If you know of The Villages, it is a very large active adult 55+ retirement community in Central Florida. One of its endearing factors is that you can go everywhere in a golf cart and membership there gets you golf for life on a number of beautiful courses. Bill T. moved there and needed to store some of this stuff . . . oh heck, we’ll let him tell the story:

“We recently moved to ‘The Villages’ in Florida from Texas.  The move was part of a downsizing and also a move to be closer to my wife’s parents.  Even though we eliminated a great amount of household goods, we were still left with seasonal items and tools that needed storage.

Most every resident in The Villages uses their garage attic for storage.  Storage space inside these modest homes is limited.  In our case, the attic already had a plywood floor but approximately only 4-feet of overhead space.

While we are still young enough to move items up the pull-down stairway, we knew there would come a day this would become increasingly dangerous.  In addition, since we are Do-it-Yourselfers, there are the occasional tools that needed storage.  The Spacelift is big enough to move a job-site table saw into the attic.  We also have a preference to a tidy garage. 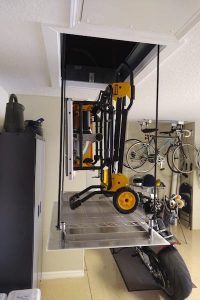 Large table saw would be very difficult to carry up and down an attic ladder.

After researching the most popular options the choices were clear between Spacelift and Versalift.  We selected Spacelift primarily since it did not require any overhead space Versalift has a cage/frame and Spacelift mounts flush with the attic floor.  However, there were other reasons including easier installation, a clean-look to the ceiling, and the price was less.  Both products could lift 200-pounds which was more than adequate.  With exception to the wall mounted remote, the Spacelift is completely self-contained.

We did choose the 5228-S Model which did require cutting a joist and providing sister joists for extra support.  The 5222-S Model will fit between 24-inch joists and would be easier to install.

The installation was very straightforward and can be done in just a few hours.  We took a little more time to trim and paint the ceiling. The instructions were very detailed. 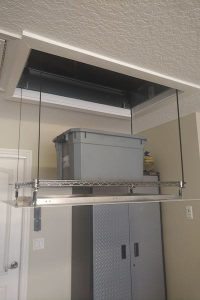 We could not be happier!  The quality and thought that went into the Spacelift is very impressive!  The microprocessor controls slows the platform before it reaches the top or the bottom.  The controls are simple and the safety features for overloading, jams, slack tension detection are important.  The spring mounted ceiling panel always makes a flush fit when fully raised.  The nylon webbing that lifts the platform rolls flat and cleanly onto the rollers.  We had concerns about the aircraft wire consistently spooling properly on the Versalift.

One additional advantage we discovered over the Versalift is the Spacelift can be stopped short of the top to allow airflow into the attic that helps keep the garage cooler.  This is a more aesthetically pleasing solution than most other home owners we’ve seen that put a block of wood on their pull-down stairs to create the same type of airflow.

Neighbors that have seen the Spacelift are jealous!”