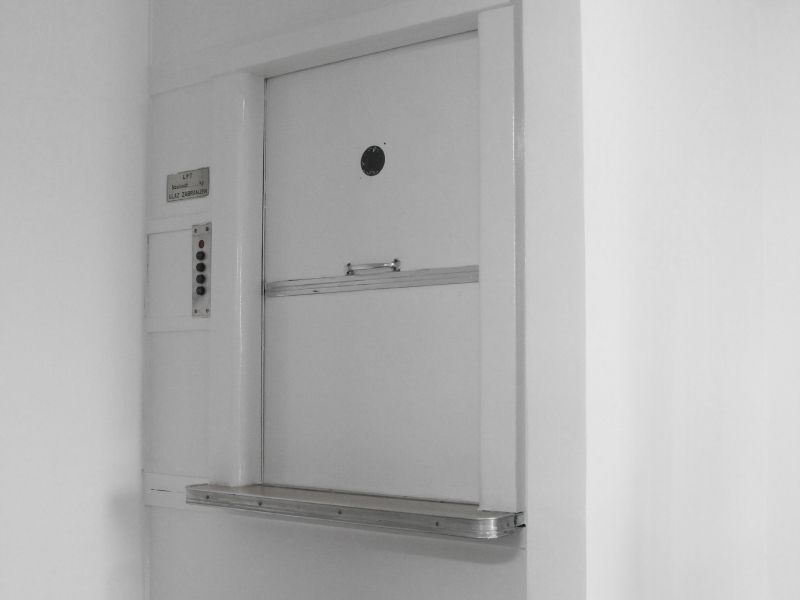 (Stratford, Conn., May 17, 2018) – Despite its funny name the dumbwaiter represents an important invention of convenience for homes and businesses. There are actually two types of dumbwaiters of different configuration but similar purpose. Both take their name from the same attribute. One modern form of dumbwaiter, the attic storage lift, is an increasingly popular addition to American homes and garages, according to Dave Berliner, president of SpaceLift™ Products.

Have you ever wondered how dumbwaiters got their unique name? Tracing its exact origin is difficult but the concept is widely agreed upon. “The small car performed services in restaurants, allowing the noise and odor of cooking to be isolated from the patrons. No doubt, this was where the silent servant earned the name ‘dumb waiter!’ The mini-lift may have been silent but it did not remain dumb,” from the Elevator Museum website. The small freight elevator you think of as a dumbwaiter was seen as a silent, inanimate stand-in for an in-person waiter. Dumbwaiters serve that function – and a great many more – to this day. New versions are being invented to carry food, storage items, dry goods, valuables and even automobiles.

Before the lifting version of silent waiters was invented, the name applied to a cart holding various courses of food. Thomas Jefferson used this kind of dumbwaiter during his presidency, both in his Virginia home and the White House. “These ‘dumbwaiters’ were small tables, equipped with shelves placed at varying heights. Some might hold salads and wine; others would accommodate cutlery and serving utensils. Servants brought in hot food, but did not remain in the room during the meal. Conversation could flow freely, without the possibility that workers might overhear sensitive information and repeat it outside the White House,” from White House History website.

Another version was a set of rotating shelves mounted into the wall between kitchen and dining room. Food was placed on the shelves that were then rotated by a spring mechanism to carry the food around to the dining room. Backing on the rotating selves isolated the two rooms.

In America, the first lifting dumbwaiter was hand powered with a lifting mechanism comprised of pulleys and weights. According to the United States Patent Office, inventor George W. Cannon of New York City first applied for a unique brake system patent that could be used for a dumbwaiter in 1883. Four years later he applied for the patent on the mechanical dumbwaiter. Patents for dumbwaiters are still being issued today. Two U.S. patents protect The SpaceLift™ attic lift, a dumbwaiter made for moving storage items between floors in homes and businesses.

As a silent waiter, food and drinks are to this day easily and quickly transported from kitchen to floors above without the manual labor of climbing the stairs to deliver the goods. Dumbwaiters provide a simple, space-efficient alternative to physically carrying items between floors. Unlike elevators, “distinguishing the dumbwaiter was its inability to handle a passenger – no control ever existed in the car,” from the Elevator Museum website.

The White House now has a series of lifting dumbwaiters to move food and other goods between the kitchen and various dining rooms. One was featured in the movie “Whitehouse Down” as the president escaped bad guys by shimmying down the dumbwaiter shaft hidden inside the walls.

“Storage lifts are an increasingly popular type of dumbwaiter for home use. They’re not just for the wealthy or expensive homes. Having easier access to storage helps you claim more storage space thereby reducing clutter in your living space”, said Berliner. “Storage lifts are like mini freight elevators. They make it easy to carry storage items between floors in homes and garages. Rather than trying to carry boxes and storage containers up the attic stairs, a dumbwaiter like the SpaceLift attic lift carries the heavy load up and down with an electric motor,” he added.

Berliner said his SpaceLift is a “smart” dumbwaiter with computer controls for safety features like object detection that automatically stops the lift if it encounters any obstruction and weight detection that stops it from operating if the load exceeds 200 pounds.

SpaceLift attic lifts install between attic floor joists. Installation is easy requiring basic carpentry skills. Many SpaceLift attic lifts are installed as DIY, do-it-yourself, projects. The lifts are sold directly on the SpaceLift website,www.SpaceLiftProducts.com. A short video on the website shows how the lift works. Prices start at $1,895 with free shipping and a two-year factory warranty. SpaceLift™ Products are assembled in the USA, in Stratford, Conn., by Redco Home, a division of Redco Audio, a family-owned company, Berliner added.

Today dumbwaiters serve commercial kitchens, restaurants, hotels, nursing homes, schools, retail establishments and private homes. The automobile vending machine introduced in March 2018 by Alibaba and Ford in Guangzhou, China relies upon a dumbwaiter, albeit a rather sophisticated one. Still silent servants, dumbwaiters are getting smarter all the time, he said.

Dumbwaiters are finding new applications including moving storage into your attic and an automobile vending machine. The SpaceLift™ attic lift is a dumbwaiter you can install in your home or garage to conveniently move storage items to and from the attic.

See a video of the lift in action at: www.SpaceLiftProducts.com.

A SpaceLift™ attic lift is installed at our company in Monroe, Conn. If you are in the area, please feel free to come in and take a look. There is also a unit installed in a nearby Trumbull, Conn., garage, shown in the attached photo. With prior notice, the homeowner would agree to have you see and photograph that unit as well. Or we may be able to connect you with a SpaceLift owner in your town or close by. Call us!